The Oldest Bank in Africa, and the World

Have you ever wondered which is the oldest bank in Africa? Or the World? Banking has been ingrained in modern society for many years, from as early as grain traders. The growth of trade and a monetary system across Renaissance-era European society created a demand for institutions that could store personal and commercial assets securely, as well as make loans available to people requiring cashflow quickly.  Today, it is difficult to think of a society without banking in some form. Banking has even evolved to the point where we can transact from the comfort of our homes, and cellphones. If one were keen to investigate who holds the title of “oldest bank in the world” you would find two European institutions that lay claim to it. 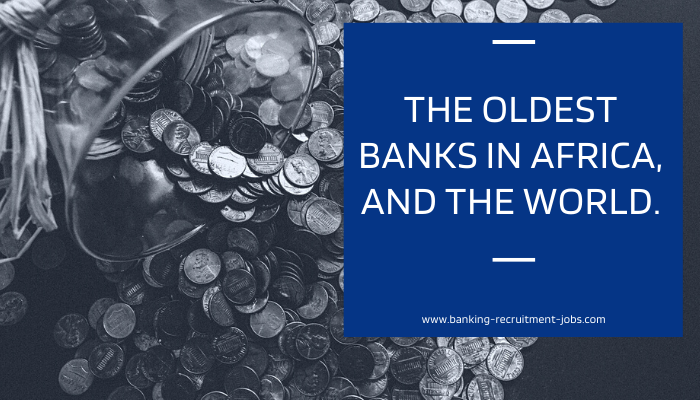 The Oldest Banks in the World

Banca Monte dei Paschi di Siena (MPS) dates back to a “mount of piety” – an institutional pawnbroker run as a charity in Europe since Renaissance times – founded in 1472 and built their banking reputation in 1624 in the city of Siena, Tuscany. The first service the bank provided to the people of Italy was basic deposits. During the 19th century, the bank offered a wider range of services, including Italy’s first mortgage loans.

Today, the Banca Monte dei Paschi di Siena bank is majority-owned by the Italian state and is the fourth largest bank in Italy with more than 2000 branches across the country.

The Berenberg Bank was founded in Germany in 1590 by two brothers, Hans and Paul Berenberg. The brothers came from a Flemish family of cloth merchants. The bank specialized in merchant banking and remains a core focus of the investment side.

The brothers brought in two new partners, Johann Hinrich Gossler in 1769 and Ludwig Erdwin Seyler in 1788. Seyler played an instrumental role in establishing strong ties to trade in the US and East Asia. The trade with the US helped the bank grow during the 19th century.

The Berenberg Bank focuses on catering for wealthy individuals and companies, mostly in private banking, investment banking and asset banking. Today, the Berenberg Bang has offices around the world in London, Zurich, Frankfurt, and New York.

Why the disagreement of who the oldest bank is?

Monte dei Paschi di Siena has the longest history and is often known as the oldest bank in the world. But some would argue that it was a pawn shop during its first 150 years and didn’t achieve full bank status until 34 years after Berenberg.

The Oldest Bank in Africa and South Africa

FNB is the oldest bank in South Africa and can be traced back to the Eastern Province Bank formed in Grahamstown in 1838, making it the oldest Bank in Africa.

Which Bank do you think is the oldest in Africa? We have seen quite a few varying reports on who the oldest Bank is.

We have the most diverse range of banking and finance jobs in Africa.

Visit our banking jobs at www.ca-finance.com/latest-jobs